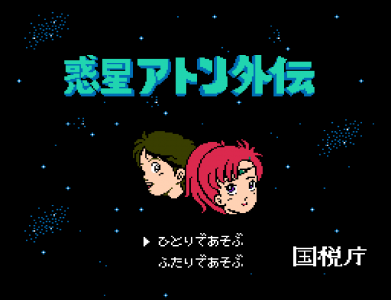 Wakusei Aton Gaiden ("Planet Aton Side-Story") is a vertical-scrolling shoot 'em up that was created by the Japanese National Tax Agency (Kokuzeichou) in order to teach children and older players about the issues surrounding Japan's bubble economy by way of a sci-fi themed parable. The story concerns the eponymous planet Aton and two young pilots who attempt to save it from some sort of economy-based crisis - one that just so happens to manifests itself as an alien invasion. The game can be played by one or two players, with player one assuming the role of the male pilot Kanta while the second player assumes the role of the female pilot Yuki. The game was made accessible to players via a system not unlike the Disk Writer service, though presumably as a government-funded game it was made freely available. It is thought that copies were given away at some manner of a Japanese tax awareness convention or from an educational group that went to various schools across the country to lecture students. As with many Disk Writer exclusive games, it is extremely difficult for modern day Famicom collectors to find.