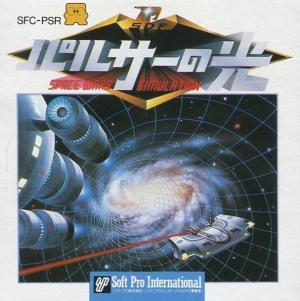 Pulsar no Hikari ("Pulsar of Light"): Space Wars Simulation is a game for the FDS created by computer game developer Soft Pro International. It's a rather dense strategic space simulator that has the player control a starship as it explores a galaxy and fights off enemy ships. The player needs to keep an eye on various pieces of information, such as their energy and their destination, and ensure they don't accidentally wander into an area with pulsars or black holes, or off the galaxy map all together. Exploration in Pulsar no Hikari seems to follow a set course of scanning nearby space, moving into the next region once it's been ascertained with the long-range scanners that there are no insurmountable obstacles to be encountered there, destroy any asteroids or enemy ships that might be prowling around by checking the short-range scanners and then long-range scan/warp to the next area. Once the ship's energy/fuel is low (combat and movement will steadily drain it), the player should return to the closest star base for refuelling. Smaller star bases can refuel the ship's standard energy unit, but damage and lost ammo (the torpedoes, of which the ship has a finite amount) must be recovered at the major bases. Accidentally warping to a location with a black hole will instantly end the game. It's generally considered a bad idea.