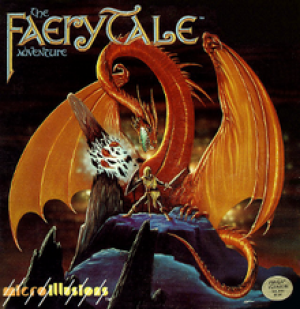 Also know as: The Faery Tale Adventure: Book I

Once upon a time, the people of Holm lived happily and peacefully, protected by a powerful talisman. But one day, their land was attacked, and the talisman stolen. A brave warrior went out to investigate the talisman's disappearance, but returned mortally wounded. Before he died, he told his three sons that the talisman was stolen by the evil Necromancer, and must be retrieved at all costs... The Faery Tale Adventure is a role-playing game in which the player can assume control of any of the three brothers - Julian, Philip, or Kevin. Each of the three has his own strengths: Julian is the archetypal melee fighter, Philip has high luck and intelligence, while Kevin is known for his kindness. Should the player fail while controlling one of the brothers, the next one will replace him. Each brother will be revived a few times when vanquished by an enemy, until his luck runs out, at which point he will die permanently. Much of the gameplay is dedicated to exploring the large world, interacting with non-playable characters and building up the brothers' combat abilities by participating in battles. The fastest-growing parameter is bravery, which is comparable to experience points and strength combined. Each defeated enemy yields bravery points; as it grows, so does the hero's vitality (maximum hit points), albeit at a slower rate. Combat system is rather simple and is done in action style, with the player pressing a key or a mouse button while navigating the protagonist towards or away from the enemy. Predating Ultima V, the game has a day and night cycle, and the main character has to eat and rest. The Faery Tale Adventure is notable for having a very vast world, usually considered the largest ever created for a video game at the time of its release. Players can explore approximately 17,000 screens of terrain. The world is also interconnected, i.e. there are no transitions between different types of areas. Items can be dropped by enemies as well as found anywhere in the game's world. There is also NPC interaction and quests the protagonist can undertake.