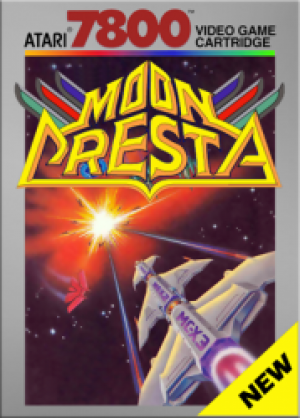 Atari 7800 Home Brew Port. Moon Cresta is a 1980 Arcade game developed by Nichibutsu. It is a single player (or two player, alternating) space shooter and was unique at the time for it’s multi-level concept. Instead of the usual format, in Moon Cresta you get a three part ship. For a 1980 arcade game, the variety and movements of the aliens are amazing. To start the game, you get the first part of your ship. If the aliens destroy part of your ship, then you get the next part. If you successfully destroy four alien waves, you must dock with the remaining portions of your ship. The quicker that you are able to dock , the more bonus points you will receive. When docked, your ship is larger and easier for the aliens to hit. Also, when firing, the cannons will alternate firing from different parts of your ship. Since the cannons are spaced differently, this has an impact on your aim. When all three parts of your ship have been destroyed, the game is over. At 60,000 points, you earn a bonus play.