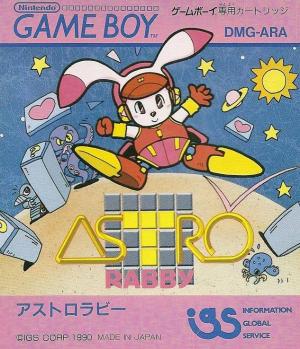 Astro Rabby is an action video game developed by Cyclone System and published by Information Global Service (IGS) for the original Game Boy exclusively in Japan on October 12, 1990. It is the first Game Boy title to be published by that company. The game puts you in control a of Rabby, a robotic bunny, who's goal is to recover stolen parts for his creator, Doc, that were taken by the Dortoise Troops. Doc's dream is to utilize the parts to allow Rabby to fly freely. The game is a top-down, vertically scrolling action game that can be considered a precursor to the Jumping Flash series. The player must jump along platforms in search of a heart, which will allow the player to upgrade Rabby and proceed on to the next level. A level will loop indefinitely until the heart is found.