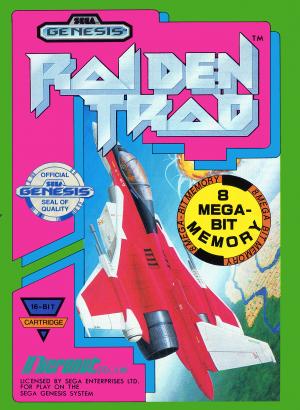 Raiden Trad ("Raiden Densetsu", or Raiden Legend, in Japan) is the home console version of the Arcade vertical shoot 'em up Raiden. Though the SNES version suffers due to supervision by notorious developers-for-hire Micronics, the Genesis version is acceptably close to the original source material despite a few necessary drops in sound and visual quality. The FM Towns version is thought to have the best fidelity of all the versions of Raiden Trad, but like the console itself was never released outside of Japan. The Jaguar version was also well regarded at the time, and a Lynx version was all but cancelled during production. There would be one more conversion of Raiden in the 90s: The Raiden Project, a launch title for the PS1. This is thought to be the superlative home version of the game. The Sega Genesis version has a secret ninth level. How to access it is unknown, but there is speculation it relates to the fairies found throughout the game. Videos online suggest that the game must be beaten on Hard difficulty to access the ninth level. The Genesis version lacks the two player cooperative play.