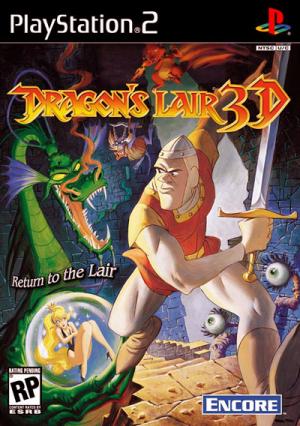 Princess Daphne has been kidnapped by the evil dragon Singe and hidden in a medieval castle owned by Mordroc, a powerful and malevolent wizard. To save her, you will take on the persona of Dirk the Daring, a goofy but courageous knight. As he advances through the castle with the help of a magical amulet, Dirk must overcome a slew of challenges, from jumping over flaming pits and climbing ropes to flying across chasms and battling swarms of the wizard's minions. Use cat-quick reflexes, cunning and resourcefulness to solve puzzles, defeat a variety of enemies, and fight your way through the castle to find Daphne and save the kingdom from Mordroc's clutches. Dragon's Lair 3D is an entirely new, built-from-the-ground-up, three-dimensional version of the 1980s coin-op phenomenon. While it stays true to the design and storyline of the arcade game, it offers a massive 3D experience unlike anything else Dragon's Lair fans have played before along with unexpected twists for a whole new adventure.