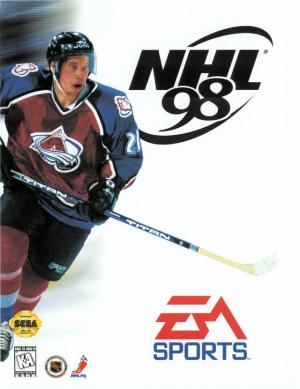 NHL 98 is an ice hockey video game developed by Electronic Arts Canada. It was released on August 31, 1997 and was the successor to NHL 97. It was the last installment of the NHL series to be released on 16-bit consoles or the Sega Saturn. Features: A match in a process between Dallas Stars and Los Angeles Kings. NHL 98 took the NHL series ahead by introducing full national teams, although EA could not get the Nagano Olympic Tournament license due to lack of IIHF license, which Gremlin Interactive acquired. The Olympic hockey license itself was acquired by Midway Home Entertainment. Jim Hughson returns for play-by-play, this time joined by Daryl Reaugh, who provided color commentary. EA Sports also introduces 3Dfx Glide support for the first time in the NHL series. The SNES and the Genesis versions are the final games in the series to be released on 16-bit consoles. Desppite his career ending injury, Vladimir Konstantinov was futured on the game. The Sega Saturn version also has Mario Lemieux in it. He retired at the end of the 1996–97 NHL season, yet was still included in the game.