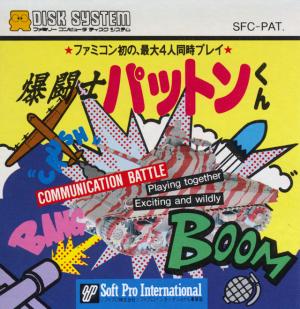 A tank-based arena combat game that doesn't appear to involve General Patton. It was developed for the Famicom Disk System by Soft Pro International. Bakutoushi Patton-Kun (roughly "Explosive Fighter Patton") is a multiplayer action game where the goal is to blow up the tanks of the other players in a series of arenas, similar to Atari's Combat. As well as destroying each opponent's tank, the player must also defeat the tank's driver as they run around defenselessly. After defeating all the other tanks and their drivers, the player moves onto the next stage. The game will, at one point during the loading process (as Famicom Disk System games ran on disks), ask the player to "Turn to Side B and Insert to Fucking Box!" It is the only type of bomb found in the game.