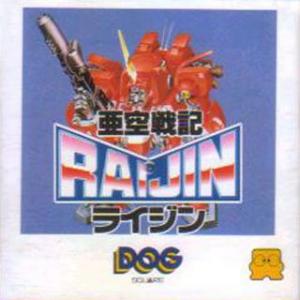 A scrolling mecha shooter published by Squaresoft for the Famicom Disk System. Akuu Senki Raijin (occasionally transliterated as Akara Senki Raijin) is a vertical shooter where the player controls a mecha that transforms into a starfighter. The game was published by Squaresoft, via their DOG label for Famicom Disk System games, and developed by Micro Cabin. Akuu Senki Raijin (and Moonball Magic, released the same day) would be the last DOG game published - Square would exclusively focus on the regular cart-based Famicom from then on. Like Square's earlier semi-classic Thexder, the player can opt to change between the two modes of their craft at certain points during each level. Upon touching ground as the mecha, the player is occasionally able to find other directions to continue exploring as a spaceship, presenting both vertical-scrolling and side-scrolling shoot-'em-up sections.