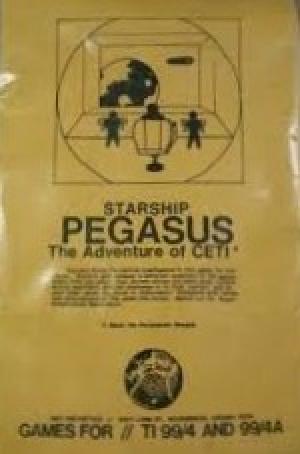 This game is a clone of the arcade game Space Zap (Bally Midway, 1980). Up to 4 players can play this game, though not simultaneously (at least not on a TI system without an MBX device). It is unknown if Milton Bradley was planning on releasing a 4 way joystick adapter to allow for all 4 players to play at once, since there were rumors that MB was developing add-ons for the MBX system (such as a foodpad). It would not be surprising if this game was meant to take advantage of a certain expansion, since it is the only game from any company on the TI to allow 4 players to compete. In addition there are 4 directions that the ship can shoot in, making it possible for 4 players to all participate at the same time. However, this is all speculation, as playing it on a TI without an MBX system only allows for one player at a time to play. his game can be used with Milton Bradley's MBX System (an add-on for the TI-99/4A). The MBX allowed for the use of Voice Recognition, improved Speech Synthesis, a 360° Analog Joystick, and an Action-Input Keypad for video games designed for it.