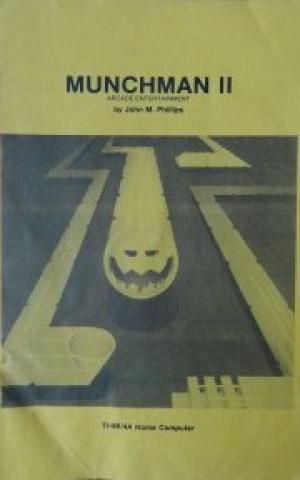 Munchman II is a sequel to the original Munchman, Texas Instruments' own variant of Pac-Man. While the first game had the munchman laying down a chain throughout the maze, this game is more like a traditional Pac-Man game with the player having to eat all the chains. There are four enemies called hoonos attempting to kill the munchman but by eating an energizer it can for a short while go after and kill them. Some new features set the game apart from other Pac-Man games. The maze is made up of two interconnected screens that the player can move between through two doors. To complete a level the chains of both screens have to be eaten. Another feature is the teleporter that roam around the maze. By running into it the munchman is transported to the other screen. There are two modes of play: arcade and tournament. In the arcade mode the player has three lives and earns an extra one after every 10,000 points scored. In the tournament mode there is only one life and no extra ones can be earned.