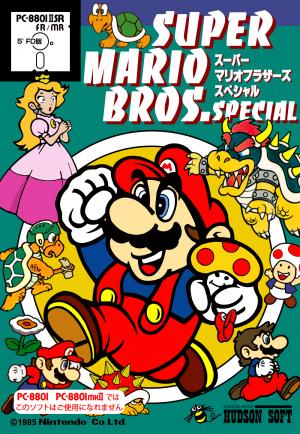 Super Mario Bros. Special was developed by Hudson Soft and released in 1986 for the NEC PC-88. While superficially very similar to the original Super Mario Bros., the game features original new levels and has a screen-by-screen scrolling mechanism. When a player reaches the end of a screen, the screen turns blank and loads the next part of the level. Jumping and dashing physics also differ from the original NES, providing a more challenging experience than Super Mario Bros. Adding difficulty is the fact that the stage time is faster than in the original NES game. Returning was Mario's Hammer from Donkey Kong, alongside a variety of past foes from earlier arcade Mario titles, and new exclusive items. Due to the PC-88 being inferior to that of the NES/Famicom, the graphics and audio differ slightly from the original game as well, although they are closely replicated. Additionally, the game does not include Luigi nor does it contain a multiplayer mode. The Sharp X1 version contains partial scrolling and slightly more colorful graphics, containing green and white colors. While the PC-88 is able to produce eight colors, the Sharp X1 uses dithering to provide additional colors into one pixel. Special only uses half of the PC-88's hardware palette, restricted to only black, red, yellow, and blue, including dithered results with those four colors. Sprites exclude the use of blue to allow transparency in the sprites. The Warp Zones from the original were changed in such a way that Special has no true Warp Zone. In World 1-2, reaching the area over the pipe instead leads to the single bonus room that could be accessed normally in the stage, but with a pipe that still leads to the overworld, thus to the end of the level. In World 4-2, a room that more resembles a true Warp Zone can be found, however the only pipe it holds does not have any destinations defined, likely due to an oversight by the developers. The pipe can still be entered, but the player will remain stuck there indefinitely, forcing the player to be killed by the timer.