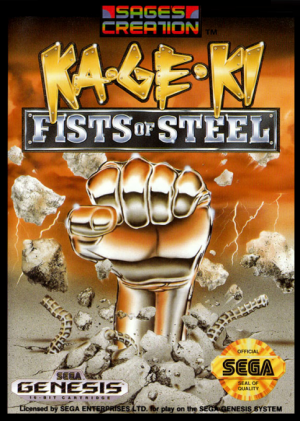 Ka•Ge•Ki is a slightly-angled 3rd person beat-'em-up set around underground fighting matches a la Pit-Fighter in which you must take down every member of a notorious biker gang. Each match begins with a showdown with several weaker henchmen and then moves on to next of the 9 gang members, who must be KO'd 3 times before moving on to the next round. The game allows you to move your character in any direction, provided he doesn't leave the confines of the arena, and allows you to attack via mostly a combination of button presses that also trigger dodges and parries depending on the button pressed. Graphics are 2D with a unique super-deformed design (stocky bodies with gigantic heads).