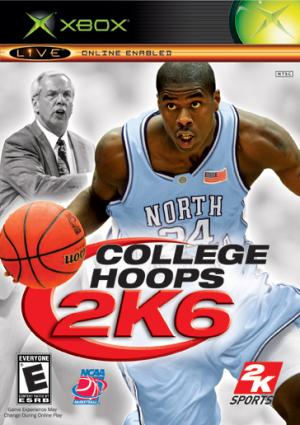 2K Sports hits the court with COLLEGE HOOPS 2K6 for the Xbox. With the focus more on coaching instead of playing with big-name stars, COLLEGE HOOPS 2K6 puts the player in charge of an NCAA team of their own. Gamers can select from nearly every NCAA coach currently in the industry or create their own. Each coach has a number of different attributes, and these attributes will determine many different aspects of the game. Charisma, for example, affects recruitment and player confidence, while discipline will help players focus on the game. Players may also bring issues to the coach to solve, which also affects the team's playing ability as well. Gamers will also have access to the coach's clipboard during the game. The clipboard will pop up automatically when gamers need to make adjustments instead of requiring gamers to access a series of menus. Another new feature are the four points of emphasis: ball control, defense, rebounding, and shot selection. Selecting one will boast the team's particular effectiveness in that area proportionate to the coach's attributes. Recruiting, likewise, has been upgraded and tweaked. Gamers can track 15 potential recruits during the season, watching their interest levels and stats and have the option of controlling the recruiting themselves or allowing the assistant coaches to deal many of the decisions. COLLEGE HOOPS 2K6 perfectly captures all of the aspects of coaching a NCAA team but, with assistant coaches and other options, never makes the gamer feel overwhelmed.