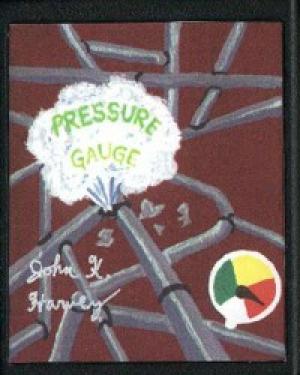 Pressure Gauge is a game that was written back in 2000 as a college exercise by John K. Harvey. It's not much to look at graphically, but this game is a "twitch" game that just may have you reaching for the reset button for "just one more round". The game was inspired by a mini-game in the Playstation title "Brave Fencer Musashi". Gameplay is simple. The initial screen says "Pressure Gauge"; from here, you can hit select to see the first homebrew attempt at a scrolling text demo (which would later be reformulated and released as StickyNotes), or you can hit the reset button to start the game. A little song will play, and you're on your way! The interface is as simple as can be-- it only uses the button. Push the button precisely when the leftmost "filling gauge" is lined up with the "range" on the left of it. Get within range, and you'll be rewarded-- slightly. The second gauge will fill up, just a little bit. You need to have a certain amount of successes in order to fill the second gauge all the way to the top, to advance to the next level. A miss results in the second gauge decreasing slightly, so you need quick skills to fill up the second gauge completely in order to advance to the next level. The rightmost bar counts down on time; run out, and it's game over!