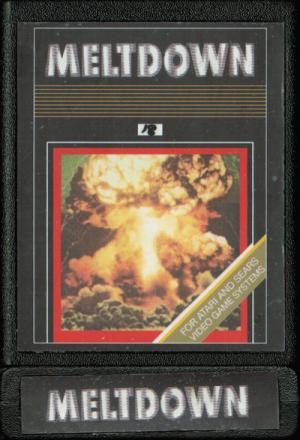 Shown at the 1983 Winter CES, and listed for release in April 1983 under what was then a working title. Also mentioned in the April 83 issue of Creative Computing magazine. The game was later discovered at CGE2K4 and released by Digital Press right after the show! According to fellow Videa designers Lee Actor and Roger Hector, the game was completed under the name Atom Smasher. After deciding not to produce it, they sold it to 20th Century Fox, who renamed it Meltdown...who also chose not to release it. When the rights reverted back to Videa, they sold it to Atari, who... (surprise, surprise) never released it, and once more the rights reverted back. Historian Leonard Herman notes Cumma Technology used Meltdown (under the name Atom Smasher) with their MetaWriter display at the same show! Watching the screen that monitors the reactor core, you notice something odd.  An atom is beginning to throb. Uh oh, this means trouble!  Closer inspection reveals a deadly Quark racing through the core, agitating the atoms. It has to be stopped before it causes a chain reaction of exploding energy!  You must line up the Stabilizing Emitter and fir cadmium rods at the hot spots.  Hurry, the action is really heating up in there. The Geiger Counter is clicking at a frantic pace. Already, the monitor is lit up with furious, pulsing action.  This is your challenge – You must meet it or MELTDOWN!