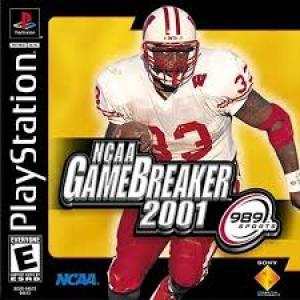 NCAA GAMEBREAKER 2001 has 115 Division I-A teams, 64 classic teams, an improved Total Control Passing interface, and more than 20 Bowl games. College football icon Keith Jackson provides the play-by-play commentary, adding even more realism to an already believable simulation. You can also take advantage of Total Control Passing, which lets you lead or underthrow receivers, just like a real quarterback would do, depending on the coverage situation. You can hit the field in Scrimmages, Fantasy Leagues, Tournament Seasons, Bowl Seasons, and Bowl games, such as the Rose Bowl and Cotton Bowl. You can also draft your players into the current version of NFL GAMEDAY, giving you the satisfaction of helping a college player realize his dreams of playing in the NFL. The Career mode also returns, starting you off at a small school and challenging you to promote through the ranks and ultimately earn a shot at the National Championship. If you're looking for the ultimate college football sim, you've found it in NCAA GAMEBREAKER 2001.