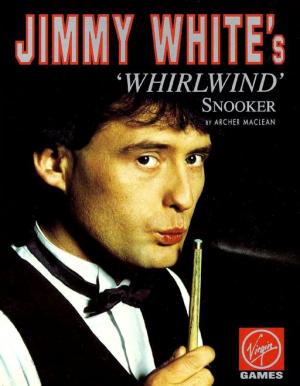 Jimmy White's 'Whirlwind' Snooker is a computer game by veteran programmer Archer MacLean, released by Virgin Games in 1991 for the Commodore Amiga. 'Whirlwind' Snooker is a highly realistic snooker simulator. Although the game was not the first to simulate snooker (or pool) in 3D, it made full use of the processing power and graphics capabilities of 16-bit home computers and was praised for its then ground-breaking realism and easy-to-use interface. Many remarked that the game was the closest thing to being on a real snooker table which existed at the time, and it could be used by a player to refine real-life snooker skills. Despite being an accurate and serious simulation of the sport, MacLean's irreverent sense of humour was prominent throughout. The sound effect used for a successful pot was a resounding "pop" and numerous animations provided comic relief should a player take more than a few seconds to shoot. Balls would sprout eyeballs and arms, making faces at the player or holding up signs that read "Get on with it!" and such. The game was followed by Archer MacLean's Pool in 1992 and Jimmy White's 2: Cueball in 1999.