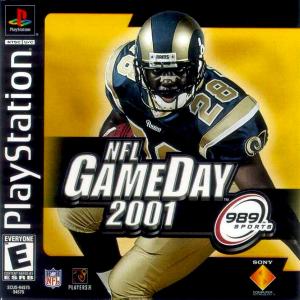 Football is war. Their season starts shortly after your Super Bowl Party ends. You can now join the march downfield with NFL GameDay 2001 for the PlayStation. Start in the Draft War Room, where you'll review your players' strengths and weaknesses on draft day. Use the game's training-camp mode to sharpen your skills and hit the playbooks. You can even create a new player in and watch his salary value rise (or fall) by how well you play. Training and general management features are fun, but the real game is on the clock, right? Well, all 31 NFL teams are represented here in NFL GameDay 2001, including more than 1,500 players scaled to their actual weight, height, and body type. There are also 200 new motion-captured moves to this series--including shoves, group tackles, drag downs, and shoestring catches--taken from more than a dozen actual pros. NFL GameDay 2001 also gives you the freedom to play as any position on the team at the touch of a button. And, one of the coolest features yet, the game is compatible with NCAA Gamebreaker 2001, allowing you to draft seniors from that title via the separately sold memory card.