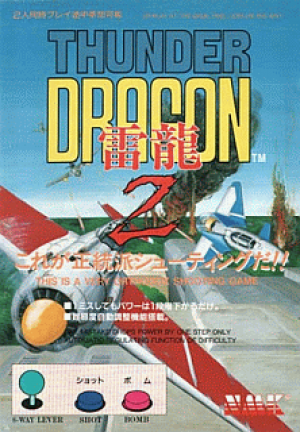 Thunder Dragon 2 (サンダードラゴン 2) is a vertical arcade shooter, developed by Banpresto and published by NMK in 1993. The game uses variable rate scrolling (the screen scrolls at different speeds or not at all), and is played from a top-down view. Unlike space shooters, Thunder Dragon 2 is played in-atmosphere on a single world with contemporary airplanes. The game contains eight stages, with popcorn enemies and ships with varying degrees of durability throughout. Each stage culminates in a boss fight, preceded by a warning. The player chooses between two different ships, a slow but powerful ship on the player 1 side, and a fast but weak ship on the player 2 side. Scoring is accomplished through enemy destruction, accumulation of medals dropped by enemies, and special bonus awards for completing specific tasks.