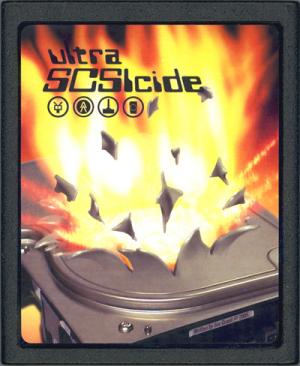 SCSIcide is an original, fast-paced homebrew game released back in 2001 by Joe Grand of Pixels Past. In SCSIcide you play the role of a hard drive read head. As the different colored bits scroll by on the hard drive platter, you need to quickly read them in the correct order before you suffer a buffer underflow. As you complete each level, the data scrolls by more and more quickly! How far can you go? If you're a fan of Activision's Kaboom!, then you'll love SCSIcide. Joe Grand has spent some time recently updating SCSIcide and has released a new version of the game titled Ultra SCSIcide. This latest version of the game contains many improvements over the original: Added support for joystick controllers. Controller type is automatically detected when you press the paddle or joystick fire button to start the game. Fixed the flicker that used to occur at the beginning of each level. Changed background and data bit color palette to make bits easier to distinguish. Reduced track size from 10 to 8 bits, for a more appropriate one byte per level. Changed speed increase per level - only two random data bits increase in speed each level. Modified the sound and scoring routines to account for longer gameplay and higher levels. Changed title screen text and added GIS and Pixels Past logos. Added a PAL version of the game.