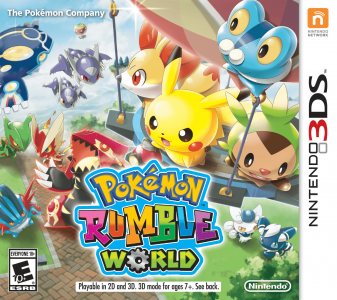 Pokémon Rumble World (Japanese: みんなのポケモンスクランブル Everyone's Pokémon Scramble) is a freemium Nintendo 3DS game released in most regions on April 8, 2015 and is the fourth entry in the Pokémon Rumble series. The game is free to download, but features in-game microtransactions. The game was also later released as a retail product with all the available microtransactions already paid for. The game features all species of Pokémon available at the time of release. Mega Evolution, including the use of Primal Kyogre, Primal Groudon, and Mega Rayquaza, is also possible. The title "Pokémon Rumble World" was originally discovered prior to its announcement due to receiving a classification from the Australian Classification Board.