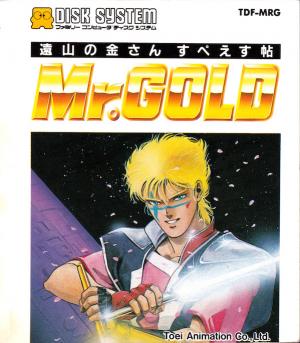 "Gold, they called him. Tall, courageous and known by all just men for two things: his lightning sword, and the cherry blossom tattoos that mark him as the most feared warrior in space." "Samurai Gold is a bold space adventure that recasts a famed swordsman and genuine hero of old Japan - Toyama No Kinsan - in a future of interplanetary intrigue and rocket fast action. In the next century. major cities and space colonies are controlled by a huge computer system called " EDO". Utilising Edo's sophisticated information systems, five Senior Administrators rule the universe in peace. But evil still lurks in dark corners. And so like Kinsan before him. Samurai Gold acts as a quiet, sharp-eyed undercover agent, spotting criminals where no police force can go and bringing them to justice. The badge of his authority, just as was Kinsan's, is the tattoos of the samurai's sacred symbol, the cherry blossoms." "Gold is a fair man, but his sense of justice explodes into a bomb of intense retribution and stunning action when criminals attack one of the five Senior Administrators - a man who also happens to be Samurai Gold's father..."