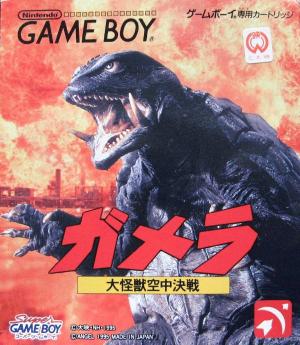 Gamera: Guardian of the Universe (Gamera: Daikaijuu Kutyu Kessen) is a Gamera game for the original Gameboy. It was released to coincide with the movie of the same title, in 1995. The game is essentially a turn-based battler, in a similar vein to the Pokemon games for the same console. Its battle system is similar to that of an RPG game, but other than that, the similarities end there. Most of the attacks rely on Button Combos, but the game provides a list of combos for the more inexperienced player. Gamera's enemies are Gyaos, Guiron and Viras. Eventually, the game's final battle pits Gamera against a clone of himself. The game's language is in Japanese, but an English fan translation does exist.