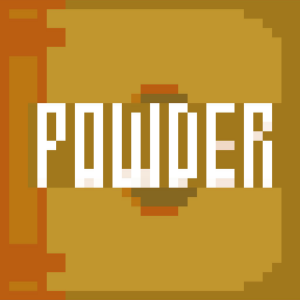 POWDER is a roguelike developed specifically for the Gameboy Advance (GBA). It is not a port of an existing roguelike as the controls of the GBA are very different from the traditional keyboard and the screen imposes some additional limitations. It is built around replayability and long term ergonomics, not short term learning. It uses actual graphic tiles (16x16) rather than the traditional characters. You may wish it didn't as I drew the tiles and am not an artist. I created POWDER for one simple reason: I wanted a roguelike on my GBA. The standard RPGs were annoying me with endless battle screens against weak enemies to unfold a drug induced plotline. I wanted a game I could just jump into and start killing things. Having had more hours than I'd care to log playing Nethack, ADOM, and the Diablos, I knew the exact type of game I wanted. The problem was I didn't see anyone publishing it any time soon. This release of POWDER is for anyone in a similar situation who doesn't want to spend the time needed to write a roguelike.