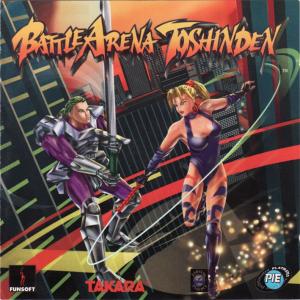 Eight traveling fighters, brought together by a common destiny, now meet at the Battle Arena Toshinden: a fighting tournament hosted by a mysterious organization known only as the "Secret Society". Many years have passed since this tournament, known only to those in the underworld, was last held. Some fighters have come for personal glory. Others have come to fight for those they love, but all will do their best to be victorious in this tournament which will decide their fortunes. Battle Arena Toshinden (バトルアリーナ闘神伝 Batoru Arīna Tōshinden?) is a weapons-based fighting game developed by Tamsoft and published by Takara and Sony Computer Entertainment in 1995-1996 for the PlayStation, Sega Saturn, Game Boy, and PC. It was one of the first fighting games to boast polygonal characters in a 3D environment, and it is credited for taking the genre into "true 3-D" due to its introduction of the sidestep maneuver. The game was originally promoted as a PlayStation exclusive, with Sony initially promoting it as a "Saturn killer" (against Sega's Virtua Fighter), but it was ported to the Saturn with additional features less than a year later. Once fighting games like Tekken started emerging, Battle Arena Toshinden quickly declined in popularity, but still did spawn a series of sequels. It was the first 3D weapons fighter, and was succeeded in spirit by Soul Edge and other games of the genre.