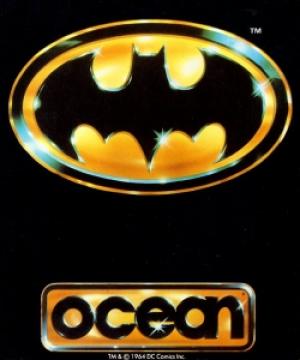 Batman also known as Batman: The Movie is an action video game developed by Ocean Software based on the 1989 film of the same name. It was released in 1989 for the Amiga, Amstrad CPC, Atari ST, Commodore 64, MS-DOS, ZX Spectrum. The game consists of five stages based on events from the movie. Each stage has a time limit and a health gauge (represented by Batman's face turning into the Joker's), with Batman losing a life if he runs out of either. The first stage sees players controlling Batman as he navigates the Axis Chemical Plant to confront Jack Napier, leading to the incident in which he becomes The Joker. In this level, the game features side-scrolling gameplay, in which Batman can use his Batarangs to defeat enemies or and his grapple gun to reach higher platforms and swing across gaps. In the second level, Batman rides in his Batmobile where he must dodge traffic and use a grapple to swing around corners to avoid running into the police. The third level is a puzzle section in which Batman must identify various components for Smilex, the deadly chemical Joker has put into the market. The fourth level takes place during Joker's parade, in which Batman must use the Batwing to cut away balloons filled with poisonous gas without hitting the balloons themselves. Finally, the fifth level, which reprises the gameplay of the first level, sees Batman make his way to the top of Gotham Cathedral to finally confront Joker. The game was number 1 in the Spectrum charts for February 1990 and was awarded Game of the Year in Crash magazine. Computer Gaming World recommended the Amiga version to action fans, but reported that the Commodore 64 version was too buggy