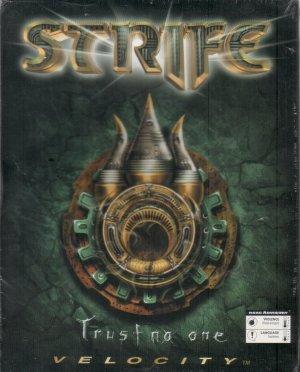 Strife: Trust no one

The game is set some time after a catastrophic comet impact, which brought a deadly virus onto the planet. The resulting plague caused deaths of millions of people, while other victims were mutated and began hearing the voice of a malevolent deity. They formed an organization called "The Order" and enslaved the rest of the populace. However, a rag-tag resistance movement, called "The Front", is trying to topple The Order's reign. The unnamed protagonist of the game is a wandering mercenary, captured by Order troops near the town of Tarnhill. After killing the guards and escaping, he comes in contact with a man named Rowan, who makes him an offer to join the Front. The protagonist receives a communication device through which he can remain in contact with a female member of the Front, codenamed Blackbird. From then on, Blackbird provides assistance and commentary throughout the game. The protagonist heads to the Front's base, where the rebel leader, Macil, sends him on a number of missions in order to weaken the Order. After several acts of sabotage, the Front proceeds to assault the Order's castle; the protagonist, accompanying them in the attack, finds and kills a major member of the Order called "The Programmer". He loses consciousness upon touching the weapon that the Programmer had been using.