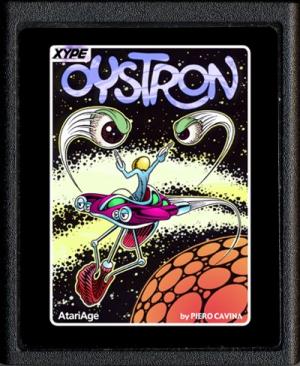 Oystron is an action game in which the player controls a ship using the joystick controller, firing at enemies and collecting pearls dropped by "space oysters". The player's ship initially appears on the left side of the screen, and enemies attack from the right. Shooting the space oysters reveals a pearl; the player then collides with the pearl and brings it to the "pearl zone" on the left side of the screen. Other enemies appear that attempt to steal the pearls. Collecting eight pearls earns the player a bomb.[1] At the end of each level, a boss named "Oystron" appears; the player can defeat the Oystron by placing a bomb in its path, or waiting until it changes into a space oyster. Following the appearance of the Oystron is a warp phase, in which the player travels at high speed and must avoid colliding with enemies. The player is given four ships at the beginning of a game, and earns an additional ship every 4000 points