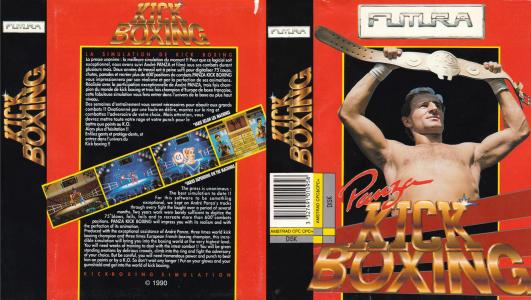 irst in a series of two games, Panza Kick Boxing is a fighting game sponsored by André Panza , former champion of kick boxing . Its outstanding feature is mainly due to the fact that boxers movements were recreated by the technique of rotoscoping , or rotoscoping technique of treating of live action and convert them to keyframe animations (in this case by scanning). One feature of the game is that the player himself chooses the movements that her character will perform (13 movements among 35 available). The game was designed by Pascal Jarry and Marc Flores, programmed by Pascal Jarry Atari ST originally with Marco Flores graphics and music by Michel Winogradoff . It was brought on by Nicolas Massonnat Amiga. Alternative title Super Kick Boxing, The Kick Boxing (ザ·キックボクシング ? , In Japan ). This second title is equivalent to the above but focused on other media, including Japanese consoles which then dominated the market. Andrew's name no longer appears Panza, the name was changed adversaries, and training sessions have been changed. A new option "Kumite" was implemented, which allows the practice of clandestine fights when the player has reached a sufficient technical level. 20 new moves are available, bringing the total to 55 (the player must always choose 13). André Panza was not paid for this version of the game.