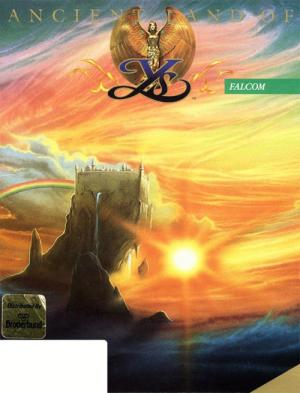 Adol is informed that he must seek out the six Books of Ys. These books contain the history of the ancient land of Ys, and will give him the knowledge he needs to defeat the evil forces. Sara gives Adol a crystal for identification and instructs him to find her aunt in Zepik Village, who holds the key to retrieving one of the Books. With that, his quest begins. Ys I: Ancient Ys Vanished (イース Ancient Ys Vanished Īsu?) (also Ys: The Vanished Omens or The Ancient Land of Ys) is the first installment of Ys, an action role-playing video game series developed by Falcom in 1987. The name is commonly misspelled Y's due to an error on the packaging of an English-language release. Initially developed for the PC-8801 by Masaya Hashimoto (director, programmer, designer) and Tomoyoshi Miyazaki (scenario writer), the game was soon ported to the X1, PC-9801, FM-7/FM-77, FM-77AV and MSX2 Japanese computer systems.[1] Ancient Ys Vanished saw many subsequent releases, such as English-language versions for the Master System, MS-DOS, IIGS, and TurboGrafx-16, and enhanced remakes for the Saturn and Windows systems. The game was also released as part of a compilation, Ys I & II, for the PC Engine/TurboGrafx-CD in 1989, along with its 1988 sequel Ys II. It has also been released for the Nintendo DS. Ys was a precursor to RPGs that emphasize storytelling. The hero of Ys is an adventurous young swordsman named Adol Christin. As the story begins, he has just arrived at the Town of Minea, in the land of Esteria. He is called upon by Sara, a fortune teller, who tells him of a great evil that is sweeping the land.