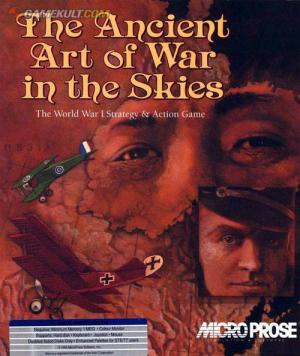 The Ancient Art Of War In The Skies

The Ancient Art of War in the Skies is a computer game developed by Evryware in 1992 for PC/MS-DOS computers as a sequel to The Ancient Art of War and The Ancient Art of War at Sea. In 1993 the game was converted to Amiga and Atari ST. In The Ancient Art of War in the Skies, the player plays either the British or German forces in World War I. In this air combat simulation, the player makes aerial assaults against opponents such as Lord Kitchener, Ferdinand Foch, Kaiser Wilhelm II, fictional enemy Helmut von Spike, or even Sun Tzu. The game acts in two dimensions. In the first one the player spends most of its time on the overhead map. He can plan the strategy and set the goals and routes for aircraft. In the second one, when the aircraft reaches its destination, the game switches to an arcade section. There are also two: a side-scrolling dog fights where the goal is to destroy the enemy aircraft shooting at them and overhead bombings where the player has to release bombs at the marked targets. Arcade sequences can be skipped and dealt by computer's calculations based on different variables.