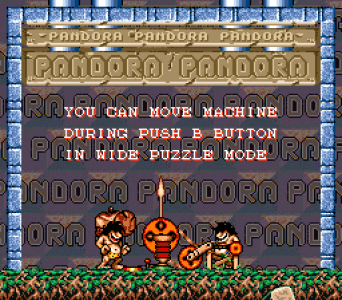 In the above-cited issue of Amuse World, Ryou Hainam mentioned another puzzle game called Pandora, which supposedly was rather successful in Europe. This seems to have been a revision of Puzzle World, which itself is a sequel to Dolmen, with the same character sprites from Prehistorik 2 or Puzzle Land. So far there's no trace of the 1996 Pandora itself, but there a later adult version called Hot Bubble, which still contains many instances of the Pandora logo.