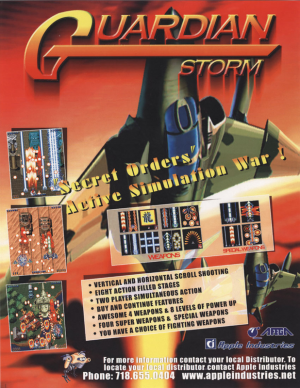 Guardian Storm runs on the same shooting engine as Red Hawk, so it can be considered as a kind of sequel. The design, however, is much more cartoony, even though the advertisement for the Western release doesn't show it at all. One of the characters is Sun Wukong on a cloud, and there's some crazy enemies like the Dol Hareubang statues of Jeju Island. Powerup pickups during the stages have become much rarer now, more enemies now drop money instead, which can be used to buy upgrades in a store after each stage, but usually spending power is very limited, which is the major reason for this game being much harder than Red Hawk. Guardian Storm was also quite successful internationally, once again some versions have been converted from upright to standard resolution in the localization progress. In Korea the game is titled Jeon Sin, using Chinese charaters, which in result led to the game being nonsensically listed as "Sen Jin" in MAME, which is now the dominantly spreaded name around the web, although a possible Japanese release is not known at all.