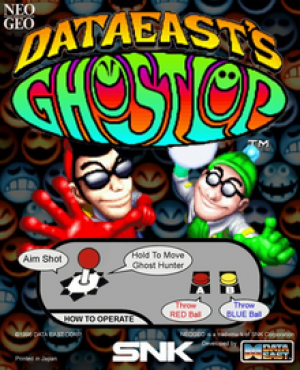 Ghostlop is a Matching Puzzle game, developed and published by Data East, which was released in Japan in 1996. Ghostlop is a head-to-head arcade style puzzle game featuring a unique mix of elements from Puzzle Bobble and Breakout, with a color-switching mechanic reminiscent of Silhouette Mirage and Ikaruga. You aim shots the same way as in Puzzle Bobble, but there are only two main colors of bubbles to destroy--or in this case ghosts. The A and B buttons determine whether your shot is red or blue. If your shot is the same color as the ghosts it hits, it will cut through them like in a bonus level of Alleyway. If it's the opposite color, it will bounce off without doing damage. You can switch as often as you like (even while the ball is bouncing around) so if there are a lot of red ghosts surrounded by a layer of blue ghosts, you could detach all of them from the top of the screen by throwing a blue shot to pass through the outer layer, switching to red to move through the middle, and then switching back to blue to pass out the other side, dropping the majority of the ghosts and putting a lot of garbage on your opponent's screen. As your ball bounces around you're free to move your character back and forth along the bottom of the screen, and you need to catch the ball when it comes back or suffer the penalty of having the pieces lower one notch. The action is fast-paced and smooth. The lighthearted characters and rockabilly music add a lot of charm that is missing from newer puzzle games like Lumines and Planet Puzzle League.