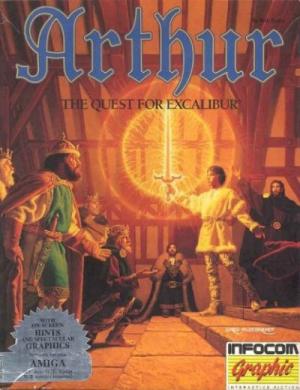 Arthur: The Quest for Excalibur

Arthur: The Quest for Excalibur is an illustrated interactive fiction computer game written by Bob Bates and published by Infocom in 1989. Typically for an Infocom title, it was released for many popular computer platforms of the time, such as the Macintosh, PC, and the Apple II series. Quite atypically for an Infocom product, it featured illustrations of locations, characters and objects within the game. It is Infocom's thirty-fourth game and is the second of two Infocom games developed by Challenge, Inc. using Infocom's development tools. The player assumes the role of a young Arthur, before the legendary days of Camelot. The "sword in the stone" (which in the legends was not Excalibur, but is often confused with Excalibur by people unfamiliar with the legends) that would signify Arthur's destiny to rule, has been stolen by the evil King Lot. In the quest to regain the sword, the player must prove to Merlin that he has the qualities needed to be a great king: chivalry, experience, and wisdom. Merlin assists Arthur by giving him periodic advice as well as the power to transform into animals, but also tells Arthur that unless Excalibur is recovered within three days, Lot will usurp his destiny as a king of legendary stature.