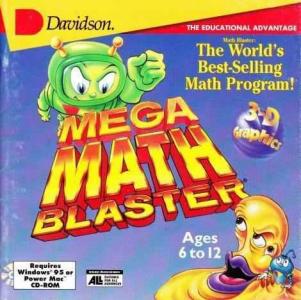 Mega Math Blaster, also known as Math Blaster ages 6-9, is a Math Blaster game. While it's loosely a remake of Math Blaster Episode 1: In Search of Spot, this is a separate game that takes place in the same continuity as the original. It features a new villain, with cameos from previous Math Blaster villains in prison, including Trash Alien, the villain from the first game. Spot is captured by Gelator after visiting planet Lockemup. Gelator begins using Spot's intelligence as his own. Blasternaut and Galactic Commander are forced to pursue. While de-oozing the planet Moldar from Gelator's Slimy grip in the process.