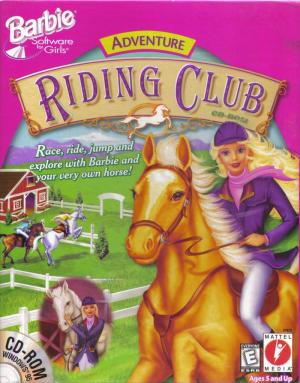 Barbie gets her very own horse ranch. Designed for the five to nine year old age range, Barbie Adventure: Riding Club lets players care for and ride their own horse. The horse riding is European (aka Equestrian) style as opposed to western, although the game doesn't force the player to take that into account when they're riding. The horse is controlled with simplistic controls to make it jump, steer, and adjust speed. After choosing a horse for Barbie, she can spend some time feeding and grooming it before saddling up and going for a ride. Riding the trails is the bulk of the gameplay. The player can race their horse against several of Barbie's friends. There are also some mini-games that the player comes across while riding. The mini-games involve activities such as arranging flowers in their proper sequence, sorting apples, and frog-hopping.