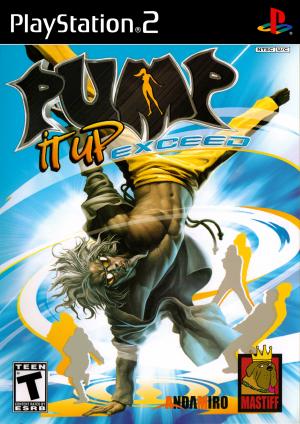 Pump It Up: Exceed

Pump It Up: Exceed is a dancing game similar to the games in the Dance Dance Revolution series. The Pump It Up dance mat is different from the norm as the arrows are set on diagonals and includes a button in the middle which allows for more complexity in the dance moves that are required to be performed in the game. The general gameplay has the player watching a music video as symbols scroll by. The player must match the symbols on the screen with the symbols on the Pump It Up dance pad with their feet. Hitting the arrows in sync with the music will keep the players life bar up and give the player a good rating, while doing the opposite will drain the life bar and give bad ratings. If the life bar drains all the way, the game ends. The game has several mode to choose from: Arcade Mode has the player trying to achieve an “A” or an “S” rating on three consecutive songs. Doing that allows the player to play an extra song. Successfully completing songs in the Arcade mode opens them for play in Home Mode. Home Mode allows the player to choose any song they have available to them. Sudden Death Mode forces the player to perform a song flawlessly or the game ends. Survival Mode - This mode becomes available after the player completes twenty songs in the Home Mode. This is an endurance test for the player, as the game keeps giving the players songs to go through until their life bar is finally depleted. Video Mode - This mode is unlocked after the player completes a total of twenty songs in either Home or Arcade Mode. It allows the player to just watch the videos for any song they've completed. Tutorial mode - Teaches the player how the game works. The game also keeps track of the players statistics (the rating grades they received for each song). The PS2 version of the game features 101 songs, while the Xbox version contains 97 songs, but offers the option to download more songs. As some songs are more difficult then others, the game provides a rating from one to twenty to inform the player on just how hard of a task they are taking on by choosing a particular song.Two dance mats will be required for some songs that offer a freestyle option if the player chooses that setting.