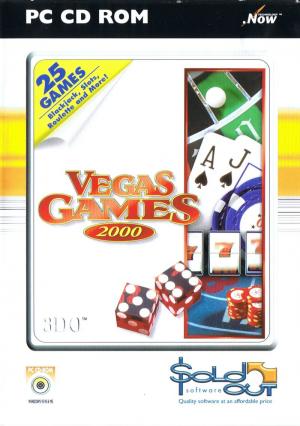 Vegas Games 2000 is a collection of casino games. The game claims twenty five games but this total is achieved by having multiple versions of some games. The package contains: Baccarat Big Spin Money Wheel Blackjack: One, Two, Four or Six decks Craps Keno Poker: 5 Card Draw, 5 Card Stud, 7 Card Stud, Texas Hold 'Em, Jacks or Better Roulette Slot Machines: Beyond the Stars, Easy Money, Love 2 Win, Buffet and Ancient Treasures Video Keno Video Poker: Tens or better, Jacks or better double down, Jacks or better high roller, Jokers Wild, Deuces Wild The games are grouped so, for example, the player selects Poker from the main menu and then selects the variety of poker game from a menu bar which appears when the mouse is moved to the upper edge of the screen. None of the games are locked out, each player starts with $5000 and can play on any of the above games. Statistics are kept showing how well the player performs on each game, these are shown o the bottom of the screen on each game and a summary can be accessed via the main menu and via the game's ATM function. Many games can be played in multiple denominations and some, such as video poker, have a double down feature. All the games are played entirely with the mouse. Internet gaming against other players is possible and requires that the proprietary Mplayer software is installed. [