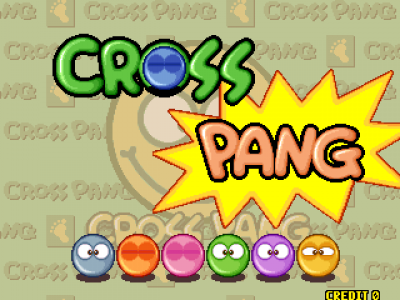 A brand new coin-op video amusement game the Cross Pang which more often called Toads’ Raid depicts a folk tale of an ancient kingdom clearing through national threat imposed by toadstools suddenly sprouted and proliferated rapidly over the kingdom disastrously. Noticing that toadstols shaped in beads of seven different colors burst up to perish when four of a color are flocked together, the royalty ordered the subject to flock them by colors thus to save the nation. Repetition of perishing four beads for preset number of times advances the player to next stage, stage by stage in likewise manner, towards the final goal of 50th stage to complete a game. In case the player fails to stop beads piling up to reach the ceiling for set length of a time, the game becomes automatically over.