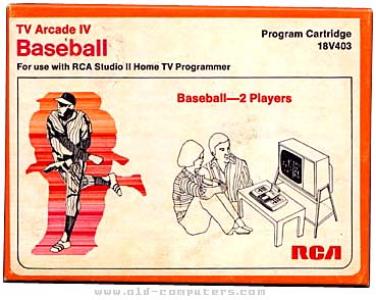 TV Arcade IV: Baseball is an adaptation of the sport for two-player. When one player is batting the other pitches and controls the movement of the fielders. A game starts with the pitcher pressing one of three keys: 5 for a straight pitch, 2 for an inside curve, and 8 for an outside curve. Holding any of the keys down leads to a changeup. The batter then has to swing the bat by pressing the 5 key. After a hit, the defending player can move the fielders up and down to attempt catching the ball. The movement of runners is automatic. The player with the highest score after nine innings wins the game. If it is a tie, up to 99 extra innings can be played or until a player gets 99 runs.