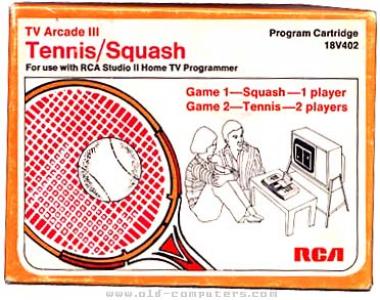 Tennis/Squash is the RCA Studio II's version of Pong and features two variations of it. Tennis is a two-player game and plays like the original Pong. Each player moves a paddle up and down to hit a ball that bounces between them. The goal is to score by hitting the ball past the opponent's paddle while at the same time preventing him from doing the same. The player to first reach 21 points wins the game. Squash plays the same but is a single-player game where the player competes against a wall. The player scores by hitting the wall while the wall scores when the player misses the ball. In both versions of the game, the player can customize the speed of the ball and the size of the paddles and thereby making the game easier or harder.