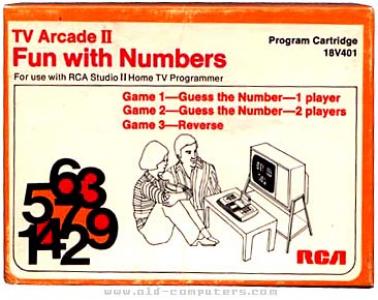 TV Arcade II: Fun with Numbers is a cartridge containing three games: - Guess the Number (1 Player): The game randomly determines a three-digit number that the player has to guess. It has to be done in twenty turns or less and for each guess, the game gives a clue in the form of a number 000 to 006. 000 means no digits are right and 006 that the guess is right. 001 means one digit is right but in the wrong position and 002 means one position is right or that two digits are right but in the wrong position. 003-006 is for any feasible combination of the previous two. - Guess the Number (2 Players): Same as above but with two human players who start with entering their own numbers. They then take turns making guesses until one player correctly guesses the opponent's number. - Reverse (1 Player): The player is presented with a randomly scrambled sequence of the numbers 1 to 9 and has to rearrange the numbers so that the numeral sequence is created. This is done by reversing a selected group of numbers. For example, pressing the 2 key reverses the first two numbers while the 9 key reverses the whole sequence. The player has 30 moves to complete the puzzle.