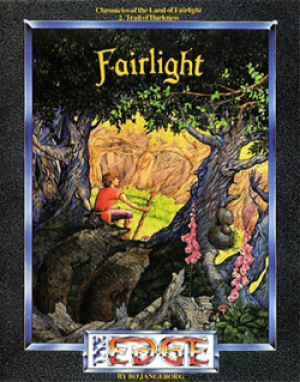 Fairlight II is a flick-screen arcade adventure with an isometric view and is the sequel to the game Fairlight. You once again play the role of Isvar who having been trapped in Castle Avars, finally found the Book of Light that the Dark Lord had taken after slaying the King of Avars. But you were tricked by the Dark Lord who pretended to be the wizard Segar who originally asked you to retrieve the book, and now the Lord of Darkness has once again possession of the book to bring darkness to the land of Fairlight. You have vowed to enter the castle to get the book once more. As you explore the castle and its surrounding areas, you must find objects to use in other locations, as well as move various objects like barrels and rocks to help you in your quest. You have pockets that can hold up to five objects. Moving around the castle are various creatures like dogs and these can be avoided or killed with your sword and if you are hit by a creature or object then you lose part of your life force which starts at 99. If your life force reaches zero then it is game over and you have to start all over again but there is a facility to save your progress.