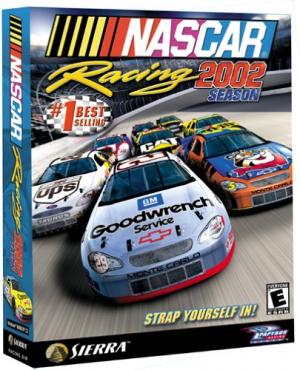 The racing game NASCAR Racing 2002 Season or NR2002 for short, was the successor to the immensely popular NASCAR Racing 4 and the immediate precursor to the even more popular NASCAR Racing 2003 Season. This sim provided much more accurate car models and a vastly improved physics engine. The box on the game prominently featured new NASCAR star Kevin Harvick in the Goodwrench #29 car, a driver missing from NASCAR 4 as the game was released very shortly before the death of Dale Earnhardt. Also featured on the cover; Terry Labonte in the Kellogg's #5 car, Dale Jarrett in the UPS #88 car, (in the background) Jeff Burton in the Citgo #99 car, Ward Burton in the Caterpillar Inc. #22 car and Ken Schrader in the M&M's #36 car.