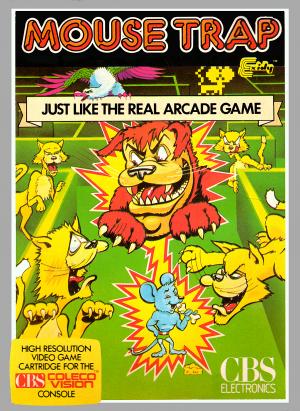 Mouse Trap is a 1981 arcade game released by Exidy. The game design is similar to Pac-Man, replacing Pac-Man with a mouse, the dots with cheese, the ghosts with cats, and the power pills with bones. The unique element of Mouse Trap is that color-coded doors in the maze can be toggled by pressing a button of the same color. The game was ported by Coleco as a ColecoVision launch title in 1982. The player uses a joystick to maneuver a mouse throughout a maze and eat pieces of cheese scattered along the paths. Six cats patrol the maze and chase the player, with two present at the outset and four more being released one at a time. The maze has three sets of color-coded doors, which the player can open or close by pressing the corresponding buttons in order to block the cats' approach. The player can also escape the cats by entering the "IN" box at the center of the screen, which will teleport the mouse to one of the four corners at random. Contact between the mouse and a cat costs the player one life.