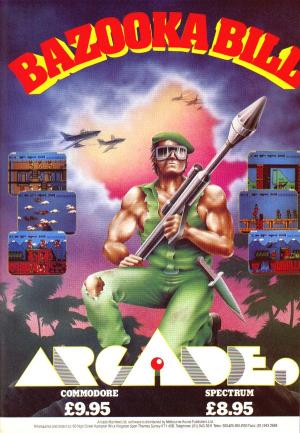 Soldier-of-Fortune and one-man fighting machine, Bazooka Bill has been sent by the Pentagon to Clark Air Base in a desperate attempt to rescue General MacArthur. MacArthur is believed held by a revolutionary faction that has seized control of some South Pacific islands. His exact location is unknown, but thought to be in the sub-tropical Atoll Archipelago, comprised of Leyte, Mindano, and Corregidor Island. Little is known about Bazooka Bill, named for exploits in the North African desert and Middle East, where reports surfaced of a mysterious bazooka-wielding soldier appearing in times of crisis. His fighting prowess achieved mythic stature after he allegedly attacked and defeated a rebel gun emplacement with only his fists! However, this mission is unlikely to succeed. Intelligence reports that the revolutionaries have been supplied with formidable weaponry, armoured trucks, tanks, helicopters and jet fighters, and Bazooka Bill is unarmed. Military advisors are relying on him to acquire sufficient weapons en route.