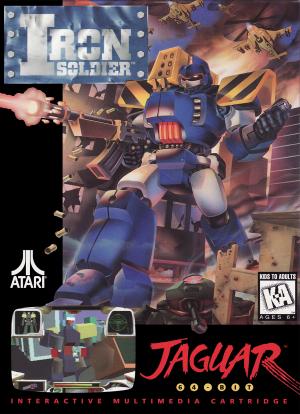 Iron Soldier is a mech sim played from an in-cockpit view. There are 16 single player missions. Objectives involve taking out certain targets, defending convoys, collecting items, and so on. It is the future, and the earth has been covered with wastelands and cities. The powerful, faceless Iron First Corporation has replaced the last forms of free government. Now, they are developing a new, 42-foot, armed robot known as the Iron Soldier. With the Iron Soldier, no one will be able to stop the Iron First Corporation. The only hope is the Resistance, a group that has managed to capture one of the Iron Soldier prototypes. You are a pilot for the Resistance. It's up to you to pilot the robot and bring down the Iron Fist.